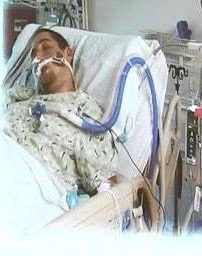 The first 48 hours was the most crucial time for Bradley to start healing, the doctor told me this morning. He was still in a medicinal coma and on a ventilator but stable. They tried later in the day to wean him off and wake him a little and he was extremely combative that it took four or five people to hold him down. The Dr. still felt that Bradley was in much danger and only time would allow his lungs to heal, his kidneys to function correctly and for him to slowly be weaned off of life support. The Following morning of his OD I had to put a plan in action. I could barely open my eyes as the tears continue to roll down and the pain continued to worsen. I knew that if I didn’t act quickly, Think rationally, and come up with a plan that I would regret it the rest of my life.  I pulled myself together best I could and did just that. I turned into supermom somehow, someway.

I got in touch with my cousin Danny Paige who in return said let me call you back. When he did, He gave me my flight information and had booked a flight for me to get on a plane to go be with my hero in Roanoke, Virginia.  I had to shuffle how my girls would make do without me for a few days so that I could go and be by his side. I wouldn’t know what to do without my sister by choice Nancy who by nature, doesn’t know how to say no. She would keep Halle and Sydney wanted to stay home although she went upstairs to a neighbor to sleep. I didn’t want her home alone. During the day, Sydney would go downstairs to our apartment and be with Kahlúa our cocker spaniel. Since the overdose happened very late in the evening, and because the only open flight available was April 14, 2012 it was now time for me to travel. While on the Flyaway Bus to the airport as I didn’t want to bother anyone to take me to LAX,  Brad's nurse called me. She told me that they were able to get him off of the life-support and that she told him I was on my way. The only thing Brad did was shake his head back and forth no no no no no! He knew he did something bad. Why else would his mom get on a plane so fast. I didn’t tell too many people about what was going on. Very few knew that my son, my real-life hero, my Bradley Could die, but hearing the news about him breathing on his own, before getting on a flight, couldn't have happened at a better time. Up Up and Away I went....

All My Love~ M