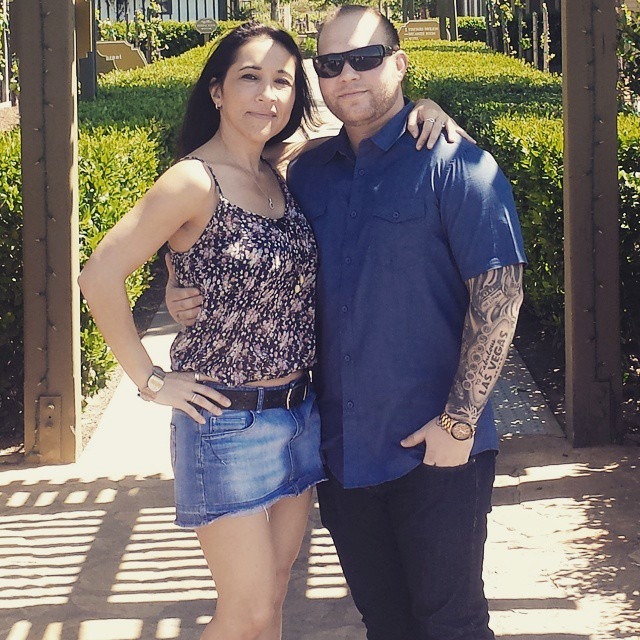 Christopher was born on October 9th, 1988 in Paramount, CA. He loved life and lived it to the fullest. He loved to sing and enjoyed all genres of music. He was a karaoke king. Christopher even sang Spanish ballads from Luis Miguel, Christian Castro and Mijares to name a few. He was proud to have served as a dog handler in the United States Navy. He did four tours in Kandahar, Afghanistan. He truly loved his country.
Christopher was a loving, kind, funny, witty and compassionate person. He made everyone that came into his life feel special.
Christopher lost his life while attending the Route 91 Country Music Festival in Las Vegas when the event fell under attack. His military training and instincts were triggered and he sacrificed his life while saving the lives of others. Christopher will always be remembered as a hero.

Most won't believe if I told you but I can't make it up. I never met Christopher in person. I grew to know him and love him through my dear friend Debby and her brother Stalin. I especially got to know him well once we all re-connected in the flesh on Facebook. He had a contagious smile and a love for family that was endless. He was an extremely selfless person who completed 4 tours in Afghanistan as a Sailor in the Navy. His love for Country was heartfelt.

Debby would always give updates about all of her children on Facebook and it was clear to all of us that Christopher was missed so very much during his 5 years in the Navy. Any chance they had to be together, they were and they LIVED and LOVED so very STRONGLY!

How blessed we all were to get to know him. His smile would melt hearts and he would light up the room at any event. His love for his mother was exceptionally apparent to all of us. He even had a tattoo in honor of his ever so loving Mother on top of his right hand as seen below. The other tattoo Debby had done on her torso in his memory. Even in death - his memory is so alive that I am still learning so much about a boy, a man, a sailor, and as long as I keep learning, I'll keep remembering and his memory will never fade.

Debby has a love for country music and and naturally Chris did too. So it was normal and commonplace for them to go to as many country music festivals as possible. Their relationship was not just mother and son, they had an unbreakable bond even death could not change. They were best friends and enjoyed each other's company very much. He loved watching chick flicks with his Mom and absolutely loved Karaoke at which he was excellent. I've seen numerous videos over the years. Chris and his Uncle Stalin had the best time ever when they were together. They sang, danced, and enjoyed every second of it. They were not only Uncle and Nephew, they were amazing friends as well.

As you can probably tell by now, Christopher was raised to love family first and that he did. From his great grandparents, his grandparents, his uncle and aunts, and the countless cousins - they were always up to something memorable - making every moment count, each and everyday. Family time was special to them all and still is. They are all extremely close to each other. To this day they still feel the most awful and painful void from this most tragic night.

I remember how excited Debby was to be meeting her boy in Las Vegas to celebrate his 29th birthday. She lives in Corona, California and he had moved not that long before to Denver, Colorado when he took a job in Colorado Springs. The plans were to meet in Las Vegas and attend the Route 91 Harvest Country Music Festival. That Sunday, October 1, 2017 they had spent a fabulous day at the pool. So they decided to take a nap prior to the concert. They stayed at Mandalay Bay in room 32218 which was located on the 32 floor. They dressed after the nap and Christopher left for the show at 6:15pm and Debby got there an hour later. When she arrived she tried calling his phone and Chris answered and said "Mom, I can't hear you, text me." and below is the picture of her text message to him. It never got to his phone.

Sadly, she never found him and that would be the very last time she had spoken to her beloved firstborn son.

The shooting started When Jason Aldean was performing.  He was only a few songs into his set when the bullets began raining down on the concert-goers. There was absolute chaos everywhere. The venue was full. There were more than 22,000 people packed in, having a fabulous time, until they started to realize that people were being shot at and falling to the ground. People started running for their lives. In the news reports and from survivors of the event, They described the shooting bullets as never-ending. During the 3rd round of shots, Debby stood straight up from covering her best friends body with hers. Her best friend heard Debby wail as loud as possible, " My Son, My Son, My Son."

My dear friend Debby was able to get to a safe place but felt in heart that Christopher was still inside. Mother's Intuition is real and Debby was so in-tuned to hers.  As any devoted mother would, she wanted to run back in and grab him to safety. She begged and pleaded but no one would allow her back into the Venue.

Hours upon hours of waiting and waiting. with well over 500 people injured that evening and taken to various area hospitals around the Valley. Even concert-goers were taking the injured to get care. Chris wasn't answering his phone, Maybe he lost the phone and couldn't call? Maybe he was looking for his mother? Without hearing from him, Perhaps he was getting medical care because he was injured during the escape or the worst thought ever, maybe he was murdered that evening? How we all prayed that he would not be part of the 58 people who lost their lives that evening.

I recall staying up the entire night and messaging with his Uncle Stalin and trying to help even though there was really nothing I could do except let him know the names of the hospitals, phone numbers, and addresses etc.. Watching the news closely and messaging him where Debby might go for answers about Chris's whereabouts. We messaged back and forth many times. I still have all of those messages.

On the morning of October 2, 2017 Debby was waiting downtown at Metro Police Department for information about her son. She was finally told he was shot and that is all the information she had. That afternoon is when Stalin told me the most awful news possible - Christopher was a casualty. He was gone. He died at the venue. One of his friends had called Debby and also told her he was shot. I was told he didn't run to safety because he was saving other peoples lives and helping them climb over a fence to safety (a natural HERO indeed) The young ladies that were wearing shorts and were getting stuck on the wired fence. Christopher would get them "un-stuck" so they could run to safety. I know for a fact that he saved many lives.

He would have turned 29 on October 9th. His birthday fell on the exact day that Debby flew to Las Vegas and escorted her son back home to Corona, California which is his final resting place. He was welcomed home by the community with a parade. I remember watching it and couldn't stop crying for my sweet beautiful friend. That entire week felt surreal. My heart was aching so badly for all those who were injured and all those who died. Many people lives were shattered that evening.

Late Sunday night, Stephen Paddock opened fire from the 32nd floor of the Mandalay Bay Casino & Resort (same floor Debby and Chris stay on) in the direction of the Route 91 Harvest country music festival. The Las Vegas Metropolitan Police Department said Monday afternoon that the death toll increased to 59, with at least 527 people injured, reports the Las Vegas Sun. The motive for the shooting remains unknown. It is the deadliest mass shooting in modern U.S. history.