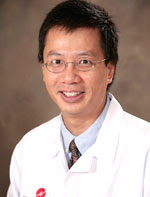 There was CLEARLY NO MISTAKE in choosing Dr. Nam H. Dang as my Oncologist who just opened Nevada Cancer Institute. This Boston Globe article about him was published the day before my treatment started. Sadly, NVCI closed it's doors for good. Dr. Dang left NVCI prior to that happening and found a new place for himself and his brother at University Of Florida, Gainesville where he still practices. I owe him an email. Truly a magnificent humanitarian and to think how blessed I was to have crossed paths with him. That alone was a miracle in itself. Especially being in Las Vegas. To this day, Vegas STILL needs a teaching cancer center. His decision to use Rituxan as a single agent off label was the BEST treatment protocol ever. Knock on wood - I've never had to treat it again!!!! 12 X Rituxan gave me the gift of NED and nearly 16 years later - NED is still my BESTIE!

LAS VEGAS -- As many times as Dr. Nam Dang slipped in and out of Las Vegas for medical conferences over the years, it never occurred to him that he'd want to live here.

Like many highly regarded professionals who are not involved or
interested in the gambling or resort industries, Dang never gave Sin City much thought as a place to work. The 42-year-old assumed he'd take the MD and Ph.D. he earned over 18 years at Harvard, settle in at a renowned cancer institution, and call it a career. That plan took a sudden sharp, and -- to his mentors and colleagues at Harvard and elsewhere -- startling turn when the up-and-coming lymphoma researcher and clinician announced last year he was giving up a cushy post at top-ranked M.D. Anderson Cancer Center in Houston after just six years to join the not-yet-existent Nevada Cancer Institute in Las Vegas. Vegas? The region's reputation in medicine, let alone cancer care, is lackluster at best. It's home to just one small medical school and a medical community that has been humiliated in recent years by two successive governors' decisions to go to California for their prostate cancer surgeries.

''I was surprised he was leaving M.D. Anderson and going to a place that had nothing going for it," recalled Dr. George Canellos, chief of medical oncology at the Dana-Farber Cancer Institute in Boston and one of Dang's key influences in research.But that challenge captured Dang's imagination when the nascent center in Las Vegas began to form and its director, Dr. Nicholas Vogelzang began courting him to be chief of hematological malignancies. The announcement in 2003 that Vogelzang, then director of the esteemed University of Chicago Cancer Research Center, would head up the Nevada Cancer Institute rocked the cancer care establishment, bringing instant credibility to the project.

After six visits to Nevada, including numerous meetings with Vogelzang and the institute's CEO, Heather Murren, as well as tours of the Las Vegas Valley, Dang finally tendered his resignation at Anderson. ''I did not know about Vegas in terms of the city," Dang said. His desk is already cluttered with journals and printouts of studies in his office at the institute's first building, a 142,000-square-foot facility that opened in September. ''Like most people I thought, 'Oh, Vegas is a place where there are a lot of hotels, that's all.' But there is a growing community here, and after I had talked to everybody and saw that the commitment here is very serious, I decided there's a real potential to achieve what they want to do."

What they want to do, Murren says, is nothing less than build a center that can compete with Dana-Farber, Anderson, and other elites. There's now just one building on the empty west end of the valley sitting in the shadow of mountains that lead to California. But the area is
slated for rampant residential growth and an expanded freeway in the coming years, and Murren hopes to add 60 acres to their 6-acre holdings.

In coming to Las Vegas, Dang and others bought the sales pitch Murren and Vogelzang laid out: Here's a unique opportunity to start something from scratch and make a significant impact on a community. ''There are few places where [scientists like Dang] can do their day jobs and have such a resounding impact on the people who live around them," Murren says. ''If I live in New York City and I'm a cancer researcher, it's great, it's wonderful, but does it really change the whole paradigm of what New York City is all about if I exist there and do my job there? Probably not. But if I move to Nevada? Absolutely. This matters to the local community -- a lot."

Even so, Dang said it was difficult to explain his decisions to
colleagues in Houston. ''When I told my boss, he said, 'Can I give you more money? Can I give
you more space?' " recalled Dang, who declined to discuss how his
salaries in Houston and Nevada compared. ''And I said, 'It's not about
that.' "

Dang -- whose family rushed out of Vietnam a week before the fall of Saigon in 1975, when he was 13, and settled in Texas -- left behind his parents, who lived a block away in Houston, and his sister, also a doctor, who lived five blocks away. Dang and his wife, Ann, have two children, ages 1 and 3, which meant giving up the support of his family in raising the children as well as leaving Houston's large Vietnamese population. Dang's background has influenced every aspect of his life. His desire
to be a doctor started when he was a boy in Saigon watching the war's
dead and wounded being brought through the streets. He wanted to help. And he met his wife, Ann, who is also Vietnamese, at Harvard. He was a first-year medical student who had been recruited to translate for the family of a Vietnamese girl dying of cancer and her doctors at Dana-Farber. The work took up too much time, so he sought help from Ann, a pre-med freshman. The couple bonded over the experience of tag-teaming as translators for six months, until the child died.

Ann, who is a cardiologist, supported the decision to move to Vegas, as did Dang's other mentors, such as Dr. Robert Mayer of Dana-Farber.

''I think people at Nam Dang's point must decide whether they want to be one of many at a large institution or whether they want to blaze some new pathways," said Mayer, Dana-Farber's director of
gastrointestinal oncology and director of the hematology-oncology fellowship program in which Dang served during the 1990s. ''In the lymphoma world, he's somebody who is growing very rapidly. I imagine he'll have an enormous influence over what clinical lymphoma work goes
on and be very influential in the resident and teaching programs."

Dr. Nam Hoang Dang, the Chief of Hematological Malignancies at Nevada Cancer Institute, learned that his drug, which is an antibody to CD26, was accepted by the FDA for Phase1 Human trials. The drug is a humanized monoclonal antibody which targets solid tumors and hematological cancers. During Dang’s 20 years of research, he discovered a molecule called CD26 that plays a crucial role in the development of certain cancers. He then worked on developing its antibody. He told the Las Vegas Sun that the drug has been effective in the lab and in animal tests for a variety of cancers, including kidney cancer; mesophelioma, a cancer of the lining of the lungs most commonly caused by asbestos; and T-cell lymphoma, a rare blood cancer.

Dang pioneered the study of CD26 over twenty years ago when he was pursuing his Ph.D. and M.D. at Harvard University. Dang was the first researcher to target CD26 to fight cancer. Dang continued his work at MD Anderson Cancer Center where he filed his patent in May 2002, “Anti-CD26 monoclonal antibodies as therapy for diseases associated with cells expressing CD26.” The patent was issued on April 3, 2007.

In 2003 he partnered with Dr. Chikao Morimoto, a researcher in Tokyo, to start a Japan-based pharmaceutical company, Y’s Therapeutics, which has raised the investment capital to help bring the drug to market.

Dang hopes that the Phase I trials will take place at Nevada Cancer Institute. The Phase I clinical trials should start in April 2008 and the results of the trial are expected to be completed in March 2010.

Sandra Murdoch, President of the Nevada Cancer Institute, told the Las Vegas Sun that Dang’s work is a “major breakthrough” which she hopes will help attract more world-class researchers. The institute has 27 researchers on its faculty, but hopes to have 80 within five years.

This entry will describe incidental findings and surveillance when fighting NHL.

Living with fNHL and pregnant