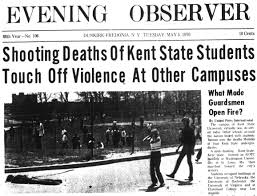 As my beautiful Sydney Paige prepares to become a graduate this week from KENT STATE earning 3 degrees and working so very hard to complete and finish even during the worst of times, with the COVID-19 - and all of life stressors including - The stay at home orders, and everything in life that we've had to adjust to, Today marks 50 years since the Kent State University Massacre which happened on May 4, 1970.

Ohio is observing the 50th year anniversary today and prior to our Governor's COVID update starting, He called for a moment of silence and we observed. He also ordered that all flags were to fly half-staff today. Below is a link to a song by Neil Young. I hope you take a listen and watch the video!
"How can you run when you know?" This should never be forgotten!

From the news today:

Four students were killed and nine were injured on May 4, 1970, when the Ohio National Guard fired on Kent State University students during a protest against the Vietnam War. The event sparked a nationwide student strike that forced hundreds of colleges and universities to close.

A night of violence in downtown Kent was followed by a student march to the campus ROTC building the next day. Some students tried to burn the building down. While the protesters claimed they left the building intact and in the hands of campus police when they returned to their dorms, the building was destroyed. It's still not clear who burned it down.

‍
The burning of the ROTC building brought the Ohio National Guard to the campus. Some students described their presence as "frightening" and called it a military takeover. Others said the guardsmen were congenial and chatted with the students, with no sense that violence would soon overtake the grounds.